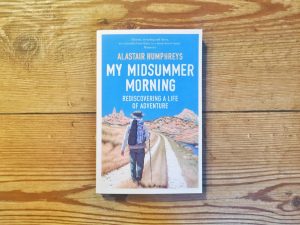 How to cope with your adventurous soul.

If you have the adventure travel bug, I don’t have to explain that it’s this feeling in your gut that makes everything about home seem claustrophobic. You want to rip down the doors and dash out of your kitchen, your family, your life. You want to breathe again.

On the eve of his 40th birthday, Alastair Humphreys finds himself in this place. He is the father of two children whom he adores and married to the love of his life, but things are pressing in on him. He resents having to change diapers and push the pram. He writes, “I willed the claustrophobic hours to crawl by. I was appalled as the years galloped on, my allotted share spilling into the dust.” He has become moody, sullen and can only think of his past exploits, which were, truly adventurous.

Before becoming a husband and father, Humphreys cycling around the world, walked the M25 in Europe and rowed across the Atlantic! He’d recently turned down an invitation to travel overland to the South Pole, recognizing it wasn’t fair to his wife and children.

While trying to cope with the battle going on in his head and his gut, Humphreys becomes enchanted with the book, As I Walked Out One Midsummer Morning written by British author Laurie Lee. In it, Lee describes how, in the 1935, he travelled to Spain with a violin on his back and a few coins in his pocket. He tells the story of the year he spent busking his way across the country as it became embroiled in a civil war.

Eighty years later, Humphreys becomes enthralled with this idea. Problem is, he doesn’t play the violin or any musical instrument for that matter. Undeterred, he takes a few lessons, negotiates with his wife for a month-long “leave” and sets off from England for Spain. He leaves his last pennies behind, planning to support himself with half a dozen poorly played songs on his recently acquired violin. Crazy.

Humphreys’ empty stomach gives him the courage to set up his music stand and slip his violin under his chin in the towns and villages he walks through for one hot summer month in Spain. His experience harkens back to his carefree days of solo travel. It’s different, he explains, but for the first time in years, he’s happy.

His adventure over, Humphreys advises those of us with an adventure-travel bug: “It comes down, in the end, to little more than summoning the guts to begin…It’s a simple solution. Simple but not easy.”

Fab Hiking in Mexico — Who would have thought?