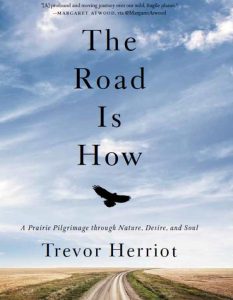 The Road is How:
A Prairie Pilgrimage through Nature, Desire, and Soul

As a writer, Trevor Herriot is audacious; as a man he’s struggling with a lot of stuff. It takes a certain level of confidence to base a 368-page book on a three-day, 40-mile jaunt along a single bald-ass-prairie road in southern Saskatchewan. But this award-winning, 50-something-year-old author, naturalist, husband and father has lots on his mind – much of it not the kind of thing you’d expect to hear from someone who’s out for a walk.

As he passes through a landscape that, he laments, has been stripped and tamed by industrial agriculture, Herriot asks himself and the hawks that shadow his journey: How can I “touch the hem of the garment of the infinite generosity of creation?” If that sounds overly effusive for a book about hiking, or gives you an uncomfortable feeling that Herriot is tending toward something religious, your concern is not misplaced. But that doesn’t mean this isn’t a book worth the effort – and it takes some effort – to read.

Herriot’s wandering stems from the advice of Bill Plotkin’s book Soulcraft: Crossing into the Mysteries of Nature and Psyche. Herriot describes it as a “how-to guide on the spiritual journey using wilderness psychology and rites of nature.” Harriot deals a lot with his own sexuality while exploring all things feminine that make him a man. It’s not the kind of thing that men often write about and it’s not the sort of text that most of the men I know read – or if they do, they don’t talk to me about it. I found this book to be a window into the musings of a man who struggles with, for example, the gap between his and his wife’s sexual appetites.

Weaving these thoughts together are Herriot’s vivid observations about the southern Saskatchewan landscape that he knows intimately. He’s a keen birder and much of his familiarity with the countryside he passes through evolves around the hawks and shrikes and ducks he spies along his way. But while Herriot’s depth of knowledge and power of observations about the nature that surrounds him far exceeds that of most people, he’s trying, on Plotkin’s advice, to go deeper, much deeper into his relationship with the natural world.

He asks: “Tell me, fellow travelers, aspen, dirt, and coyote – what is needed if we are to become more alive to the great openness, the expansive web of earth-bound spirit within, around us, and beneath our feet?”

The Road is How is a powerful text whose message sometimes – well often – gets lost in the complexity of Herriot’s prose. You’ll find yourself having to re-read sentences, paragraphs and perhaps the entire book to understand his meaning.

Harriot concludes, “A three-day walk…has been enough to show me that this next phase of life is about giving my life away, and staying awake and watchful for paths that will take me there.”

*About the author: Trevor Herriot is an award-winning author, naturalist, and speaker. His first book, River in a Dry Land, received several national awards and was a finalist for the Governor General’s Award for Non-Fiction. Grass, Sky, Song was a Globe and Mail Best Book of the Year as well as a finalist for the Government General’s Award and the Writers’ Trust Prize for Nonfiction. Herriot has written two radio documentaries for the CBC’s Ideas and is a regular guest on CBC Radio Saskatchewan’s Blue Sky. He lives in Regina with his family.

An Adventure of Another Sort