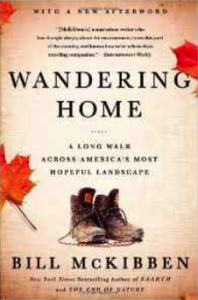 Long an environmental hero of mine, Bill McKibben didn’t let me down with Wandering Home, his book about walking. Authored by Bill McKibbon as part of a series called the Crown Journeys published by Penguin Random House, he dons his hiking boots, packs up his tent and stove, and takes us on a journey through his favourite landscape: Vermont’s Champlain Valley and New York’s Adirondack mountains.

Lessons About My Own Community

A shortish read, at least I blasted through it in a couple of days, Wandering Home taught me a lot about this spectacular part of the world. Perhaps more importantly, it made me think long and hard about some of the environmental and cultural issues that are so pertinent in my own daily life in Southern Ontario. McKibben’s insights into the changes and challenges to the landscape he walked through regularly stopped me in my tracks. Luckily for Bill McKibbon, the pressure to develop in Vermont and the Adirondacks is a fraction of what it is where I live in the shadow of Metropolitan Toronto. The closest major city to McKibbon’s homes is, after all, Montreal.

No doubt geography has a lot to do with McKibben’s description of his piece of America as a “hopeful” landscape. Not only are these places breathtakingly beautiful, they are remote compared to much of the eastern United States. He knows them well as he has houses in both places. In the book, Bill McKibben walks from one of his homes to the other (Vermont to New York). He describes it as a route of “a couple of hundred miles.” En route, he crosses massive Lake Champlain in a rowboat paddled by none other than John Davis, the former editor of the journal published by the radical environmental group Earth First! McKibben discusses how this group transformed his view of the world, how it made him recognize “their frank and joyful denial that humans mattered most….”

We Meet Many Characters En Route

Lewis is one of a cast of characters Bill McKibben introduces us to en route. We meet wine makers and foresters and farmers and beekeepers. We learn how the organic food movement that propelled Vermont’s verdant valleys has given way to a local food movement as a way to compete with the now multi-national, California-based industrial production of organic foods. Local, notes McKibben, can’t be appropriated by big business in distant places.

He climbs several of the Adirondacks’ highest peaks and alongside a nascent Hudson River. As he does so, Bill McKibben astounded me with the reality that the 2.4-million-hectare Adirondacks Park is four times the size of Banff National Park.

He discusses the remarkable return of the forest to the Adirondacks with a combination of awe and sadness, writing that some passings are “sadder than others. The conversion of a farm into a strip mall…saddens because it’s irrevocable…Whereas the slide of a farmstead or a woodlot into wilderness—or vice versa—merely trades one appropriateness for another. It’s like the passage of a youth into adulthood, a slow change that, with luck, never strikes an observer as too abrupt or ungainly.”

His observations about Vermont are the ones that catch my attention. I’ve long thought of Vermont as a place that my home in Caledon, Ontario should aspire to. A place where local food rules, and residents celebrate their valleys and mountains as well as their towns and villages.

My brother once referred to Vermont as “Caledon on steroids.” Vermont’s rural-ness benefits from being a long way from a major urban centre. Boston is beyond commuting distance, and Burlington, Vermont’s capital and largest city, has a population of only about 50,000. In fact, there are less than 700,000 people in the entire state. This protects it from the relentless development pressures that so worry me about my hometown. Bill McKibben writes of the “oversized manse” that blocked his access to Lake Champlain on his walk, noting, “This place was by any definition an invasive, a blight or a fungus spread by money pouring in from the south.” How often have I had similar thoughts when viewing one or another showpiece “mansion” stuck atop a farm field with nary a tree or effort made to blend it into Caledon’s countryside.

Bill McKibben launches into a discussion about how today’s society has so little respect for the landscape or for other people. I imagined the motorcycles that roar through my home village of Belfountain without a modicum of respect for the impact their noise has on our peace and quiet. And our precious little park that may be remodeled to accommodate ever more strangers at the expense of the social fabric of the local community. Bill McKibben made me wonder: Is this progress? Wendell Berry, a colleague of McKibben’s, recently tweeted the Amish question: “’What will this do to our community?’ tends toward the right answer for the world.”

Bill McKibben is best known for his climate change efforts with 350.org, the organization he founded to combat global warming. That work meant he spent years in airports travelling away from his beloved homes. Clearly much of his environmental passion is driven by his love for his local landscape. He writes, “I’m glad too that as I grow older, I can see myself subsiding back into this region…The thought of growing old in this place…pleases me to no end. It still feels to me like the most hopeful landscape on the planet, not to mention the loveliest.” That more of us could feel this same sentiment.

Textures of the Bruce Peninsula

Hiking Mexico-style: A little bit of everything