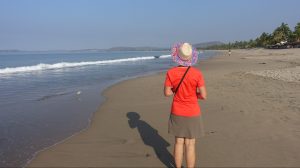 There are many types of hikes: mountainous ones, flat ones, those that follow a rail trail, bushwhacking, village tours and ravine walks, for example. I now add to that beach hiking. To be a hike rather than a walk, I suggest it should be more than a couple of kilometres long and have lots to look at, both in and out of the water. Throw in some great swimming spots and include a place to stop for a latte or a brew and you have the makings of a very enjoyable morning or afternoon.

Over two days in March, I took these photos to show you what a walk around Bahia Tenacatita is like. The Mexican village of La Manzanilla sits at the south end of this 8k-long beach on the Pacific Ocean. La Manzanilla is located between Puerto Vallarta to the north and Manzanillo to the south. The water is warm but not as rough as you find on much of Mexico’s west coast. 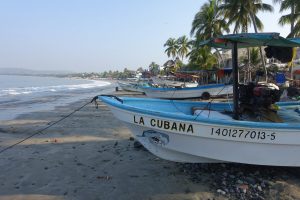 Small fishing boats crowd the southern end of the bay and those who operate them are often kicking around sharing stories. Often times in the morning we’d see piles of shucked oysters and occasionally empty beer cans. 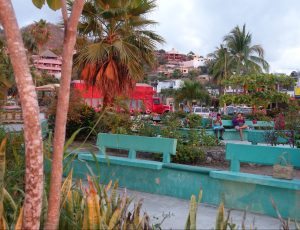 The town itself is small and colourful, with a population of about 2000 inhabitants that grows in the winter when snowbirds, primarily from British Columbia, but also from Quebec, take up residents. We were there for three weeks and while we met the occasional American, we didn’t meet anyone else from Ontario.

The name La Manzanilla, which means “apple,” was apparently used because there are many hawthorne trees, though I’m not sure of the connection. The Indigenous people who lived in the region were the Purepecha. Interestingly, there are many Purepecha people living in and around Patzcuaro, the town some 600km to the southeast, where I often spend part of my winter. If you read my newsletter, you’ll learn a lot of the Purepecha’s fiery game of hockey so stay tuned. 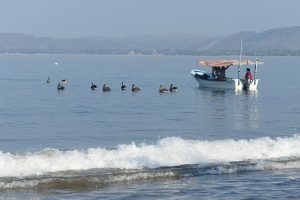 Pelicans are a common sight along Mexico’s west coast. These ones are patiently waiting the return of the fishing boats. Normally you see these large-billed, enormous birds diving beak first directly into the water. You can’t get enough of watching them and of the hundreds of pelicans I’ve seen dive, I don’t think I ever saw one not come up to surface and take a big swallow to down a live fish.

In addition to pelicans, there are lots of even larger magnificent frigate birds, terns, gulls and, my favouite snowy egrets. 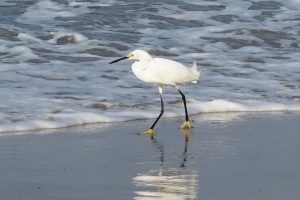 I love the yellow feet of these beauties. They are about a foot tall and though not obvious in this photo have beautiful wispy feathers. After spending the winter in Mexico, many snowy egrets grace our shores in Ontario. 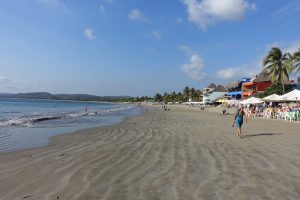 While this beach walk starts out with the typical beachfront restaurants, sandcastles, screaming children and the occasional boombox, these trappings of civilization soon give way to a more remote experience. 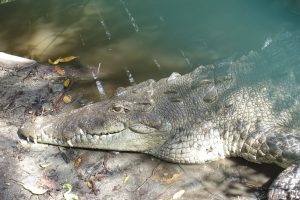 This lovely guy was but a mini among the more than 300 cocodrilos who live literally a few metres from the beach in a mangrove swamp that you can tour along a kilometre-long trail that often crosses the water. The largest ones are over 4 metres long and they can live for a century. La Manzanilla’s crocodiles are particularly docile and the people who run the reserve where they live say that no one in La Manzanilla has been eaten by one. Besides, they told us, sometimes they only eat once a year. When we asked about dogs, they shook their heads. Well, yes, sometimes dogs fall victim to the crocodiles.

They occasionally leave the reserve and cross the beach to hunt in the ocean as there is no barrier between their mangrove swamp and the beach. We met a Polish woman whose Mexican husband owns a restaurant along the beach. She said that one night she was walking along the beach in the dark and kicked something hard. Turned out it was a crocodile. Yikes. 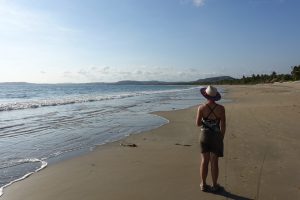 With the sun getting lower in the sky, we finally got away from the rest of humanity and the crocodiles. We continued walking for almost an hour along this wonderful flat beach that has such hard-packed sand that many people ride their bicycles along it. We saw lots of fish and other sea creatures washed up on shore. We think that because the beach is so flat, they get caught and the tide doesn’t pull hard enough to help them return to the see.

Below are some of the creatures that caught our attention. 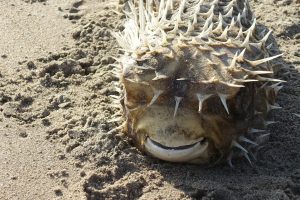 These fish, known by a number of names including pufferfish and blowfish were a common sight on the beach. You don’t want to get close to these guys. I read this about these strange creatures: “Almost all pufferfish contain tetrodotoxin, a substance that makes them foul tasting and often lethal to fish. To humans, tetrodotoxin is deadly, up to 1,200 times more poisonous than cyanide. There is enough toxin in one pufferfish to kill 30 adult humans, and there is no known antidote.” 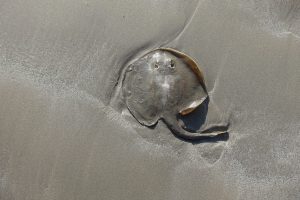 I believe this is — or was — a round stingray. They aren’t as fearsome as pufferfish and crocodiles, but they are best avoided. I read this, “Stingrays are aptly named for the venomous serrated spine located on the tail, with the round stingray being no different. Although stingrays do not attack people, the tail spines can cause painful wounds if stepped upon or handled without caution.” 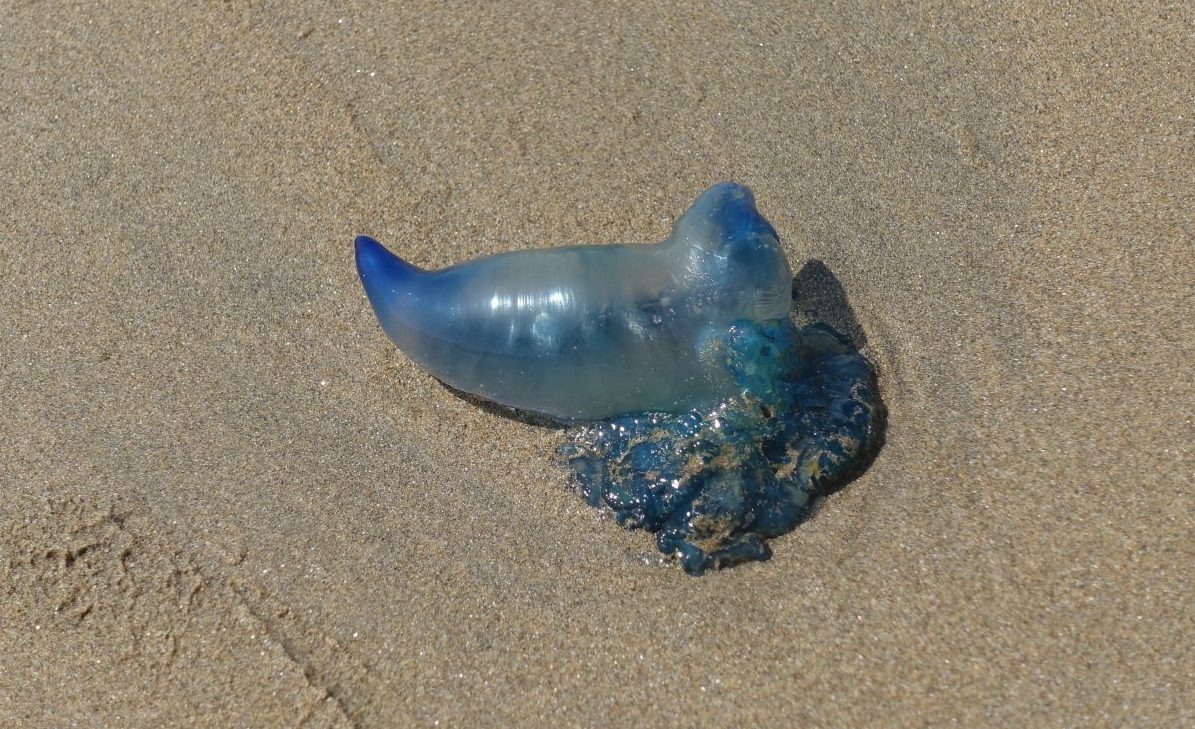 Anyone who gets my newsletter will know this is a Portuguese Man O’war. Beautiful but don’t touch. Apparently, they aren’t deadly but if they sting you it is very painful. Not knowing what we were looking at, my partner Alex decided to pick this guy up and put him (her?) back in the ocean. He used a stick and dropped it once just missing his foot. It was only when we got back and looked up what it was that we realized what Alex had been carting around. Crazy man! 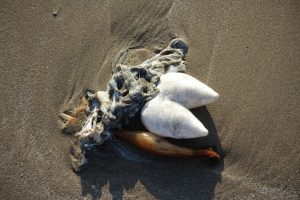 I couldn’t figure out what this creature is. Maybe someone out there knows. 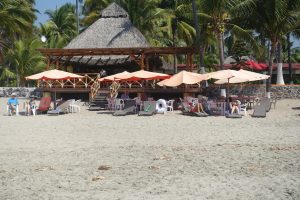 On this evening, we didn’t stop in at this small boutique hotel. But we sometimes would have a beer and several times we had an amazing breakfast. The Canadian chef made the best pancakes and the most wonderful omelettes. The hotel is called Chantli Mare. It isn’t cheap but it certainly was a lovely out-of-the-way spot with a wonderful restaurant. We ate dinner here on our last night in La Manzanilla. 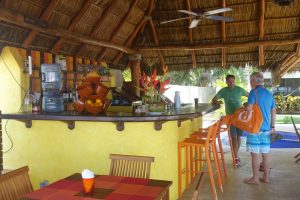 The dining room was under the palapa and looked out over the ocean. Beautiful. 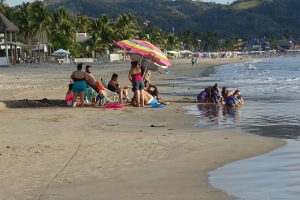 On our return trip, we passed by this Mexican family. They were having a ball digging in the sand, throwing beach balls, swimming, eating and drinking. You can’t see it in this photo, but they had an enormous cooler filled with treats. Mexicans love their food.

Then it was our turn. We were nearly back from our 9k walk on the beach when we decided to stop at Cocos Drinks. 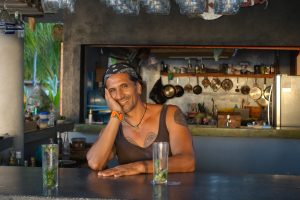 Anex is the owner and he certainly suits the part of a beach bartender. He’d actually saved up enough money to build the place and had only opened it a couple of months before we were there. He runs the place with help from his Polish wife. She was the one who kicked the crocodile by mistake. Anex’s speciality is mojitos. Despite their being Cuba’s national drink, he makes them in all sorts of flavours. I stuck to Fidel’s favourite that is made from white rum, soda water, some Yerba buena and a bit of sugar, if I’m not mistaken. It was great. You can also get sushi at Coco’s Drinks. 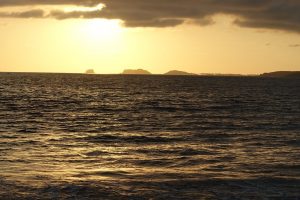 The sun was making a spectacle of itself as we walked the last half kilometre. It was a beautiful sunset, but not nearly as wonderful as one we’d seen a couple of nights earlier. It was probably the most spectacular one Alex and I had ever seen. A Zimbabwean couple who actually lived in British Columbia and were on holiday in La Manzanilla agreed with us. We sat with them with our jaws dropping. But this one is pretty nice too. Great way to end a walk. 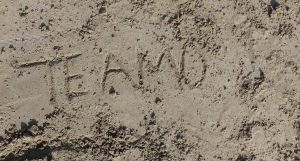 Fab Hiking in Mexico — Who would have thought?