Patagonia is the large region of southern Argentina and Chile extending from the Rio Colorado to the Strait of Magellan and from the Andes to the Atlantic coast.  The name derives from the Spanish word “patagon” (large, clumsy foot) used by 16th century Portuguese explorer Ferdinand Magellan to describe the Indigenous people, who his expedition thought must be giants based on their footprints; indeed, the first peoples of this region are among the tallest races in the world.  The Patagons were likely the Tehuelches of today, some 6,000 of whom live in Argentina.

I wonder if I’d return to Patagonia.  Our weather was so uncommonly good in a place known for the opposite that I may not want to chance going to the ends of the earth again, with the greenhouse gas emissions that accompany 13 hours in the air, however fabulous the hiking.

Our trip with G Adventures started in Buenos Aires (BA), and a couple of extra days in BA before the tour were a great introduction to Argentina.  We were lucky enough to arrive on a Thursday, so we headed out to the once-weekly afternoon gathering of Las Madres de la Plaza de Mayo – mothers and grandmothers who for 41 years now have been honouring the 30,000 “disappeared” from the dark days of the 1976-83 military junta and demonstrating the power of women in Argentine culture. 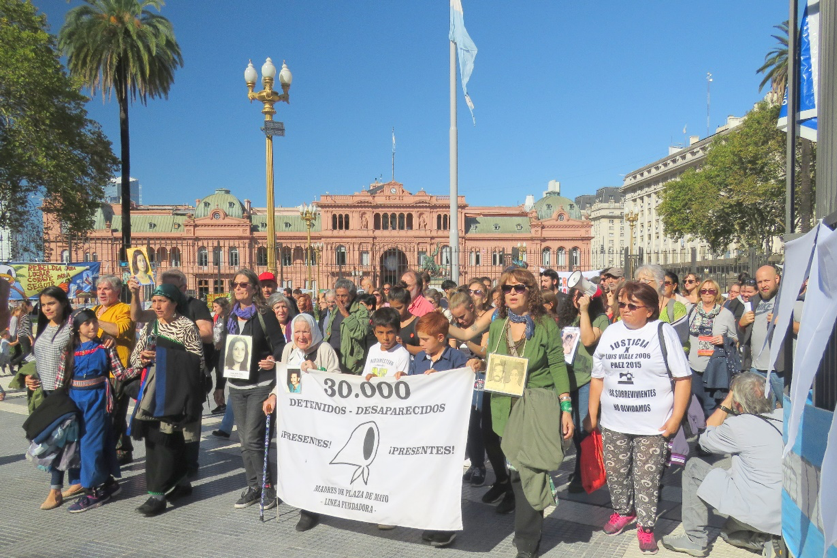 Our first Patagonia hiking base was the small town of El Chalten, founded as recently as 1985 in Argentina’s bid to assert a claim to this area right at the border with Chile. The town is entirely focused on outdoor tourism (think Banff in microcosm).  This is the northern hub of Parque Nacional Los Glaciares (Glacier National Park).  The name is Indigenous, from the Tehuelche language, and means “smoking mountain” referring to the highest peak (also called Cerro Fitz Roy) – typically cloud-enshrouded, as you see here. 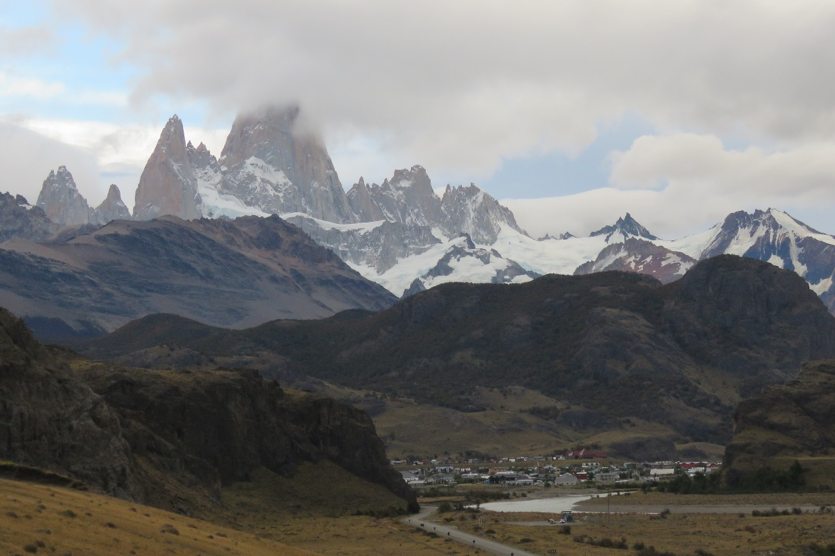 A 27-km day hike (Laguna de Los Tres) started out in gorgeous sunshine but by noon we were socked in with rain (staying only 10 minutes at the destination) that lasted through the night and the next morning.  That dashed our plans for another full-day hike (Laguna Torre), but we squeezed in a shorter one to a mirador (lookout) part way along that route.  The night’s rain in town was snow in the mountains, rewarding us with a great view of snowy Cerro Torre’s three stunning spires – not often seen so clearly. 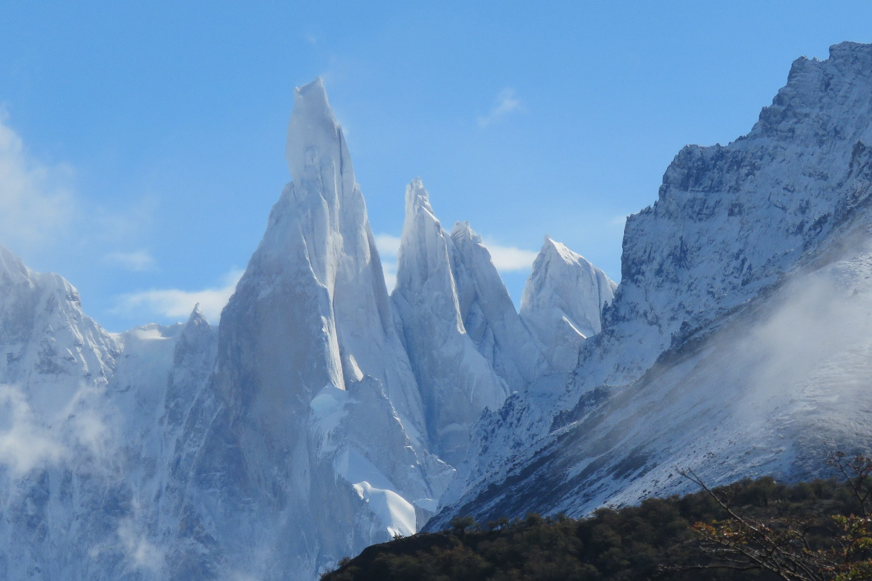 As a half-day break from hiking, we went white-water rafting on the Rio de las Vueltas, which our river guide considered the best rafting river in Argentina.  Navigating along 17 kilometres that included many Class 4 rapids, I felt both exhilarated and terrified.  I think I’d rather have been hiking.  El Chalten provides options for short hikes, which we did that afternoon. 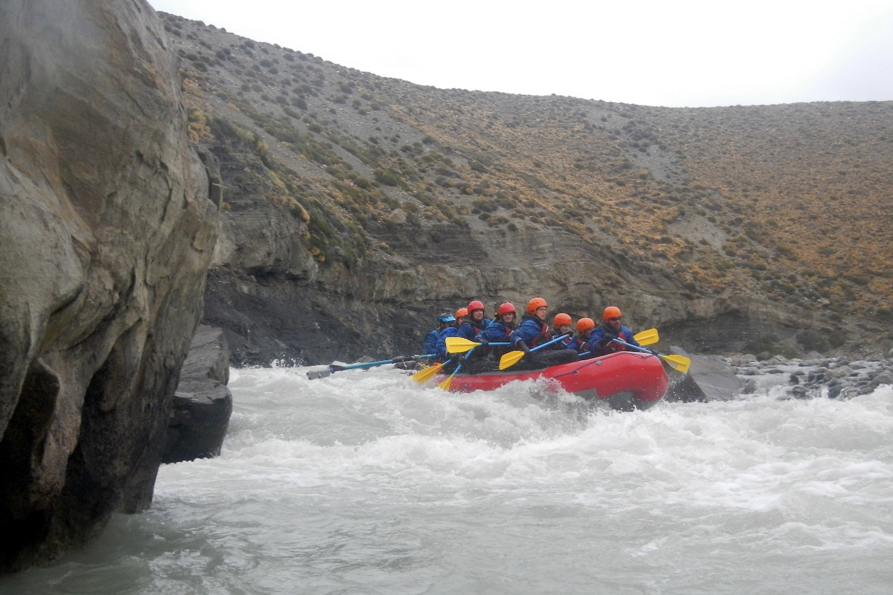 Our tour featured another non-hiking activity that’s a must-see if you’re in the El Calafate area – the Perito Moreno Glacier, in the southern part of the same national park.  Don’t tell the climate change deniers about this one. Because of local topography and climate, it is not receding; it has been in a steady state for the past 100 years.  A short boat trip on Lago Argentino to the southern face of the glacier is not to be missed.  Throughout a couple of hours later on, viewing the glacier from various platforms on land, we heard and saw the glacier calving many times. The Southern Patagonia Icefield is the third largest in the world, after those of Greenland and Antarctica. 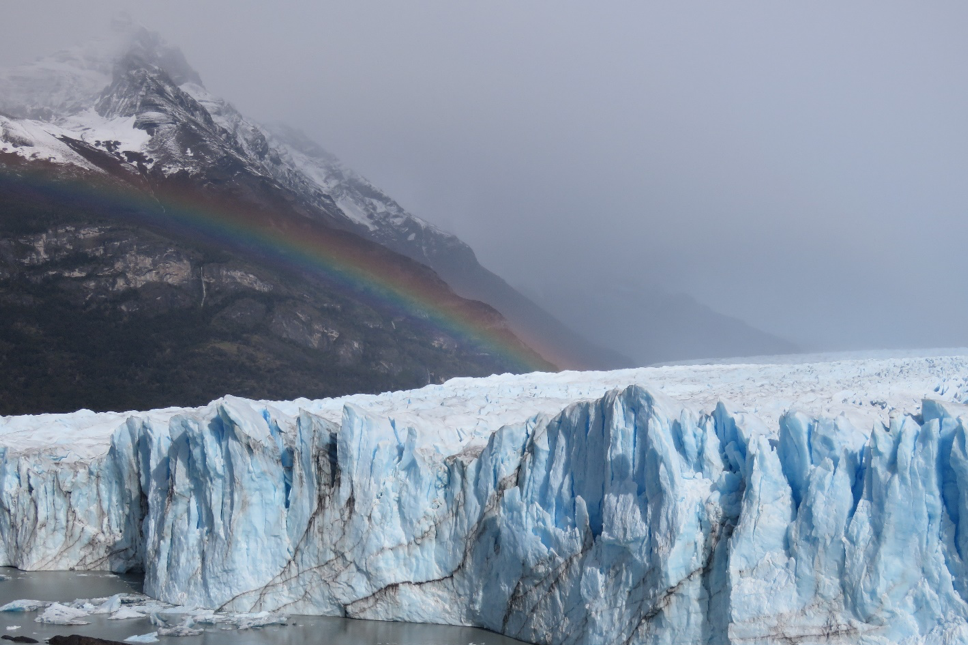 The El Chalten hiking doesn’t really need a guide, but I was very pleased we had local guides – two of them for our group of 16 – for the four-day W Trek in Parque Nacional Torres del Paine (“towers of blue”) in Chile. They did great nature interpretation, knew the trails and what to expect, and knew how to pace our hike each day.  Lucky us – starting off the trek with a stunning climb to the towers of blue themselves –  these three massive granite beauties. 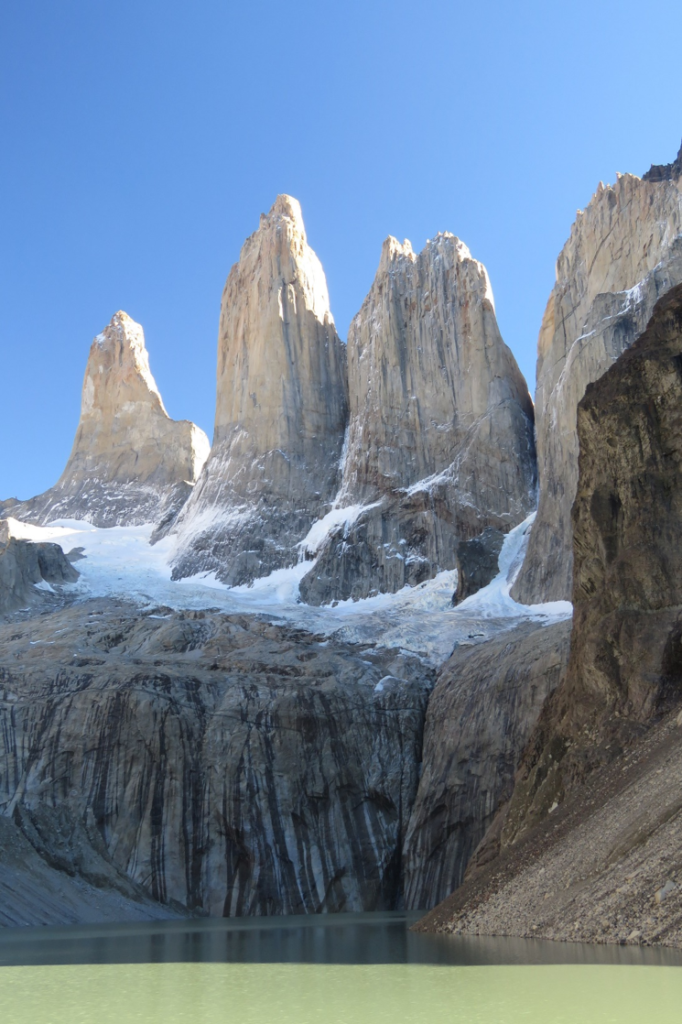 A bit about our group – we were from Canada, the United Kingdom, Australia and the United States, and we ranged in age from early twenties to mid-sixties. No truly bad apples!  Here we are on the last day of the W Trek, enjoying one of our final views of Lago Nordenskjold and the vista looking away from the high mountains. 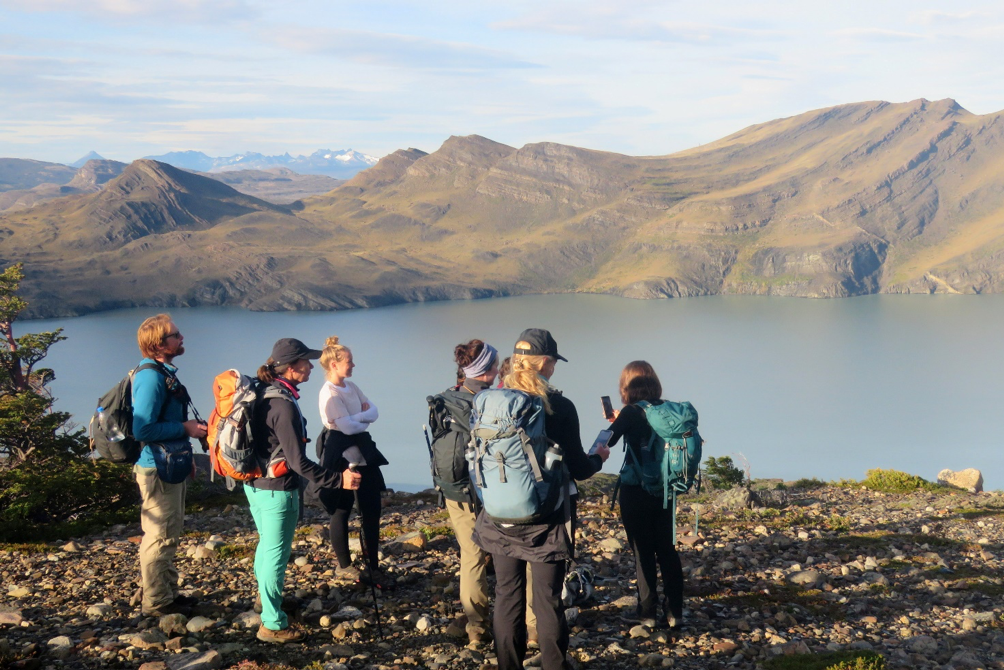 Yes, one of our four days of the W Trek was entirely in the rain (thankfully, the shortest day, at 11 km).  Our destination was a viewpoint on Lago (lake) Grey looking over to Grey Glacier, which is, indeed, receding.  Lago Grey is very turbid, full of glacial “flour” (rock flour) and for that reason, completely devoid of life.  This photo was taken in the pouring rain! 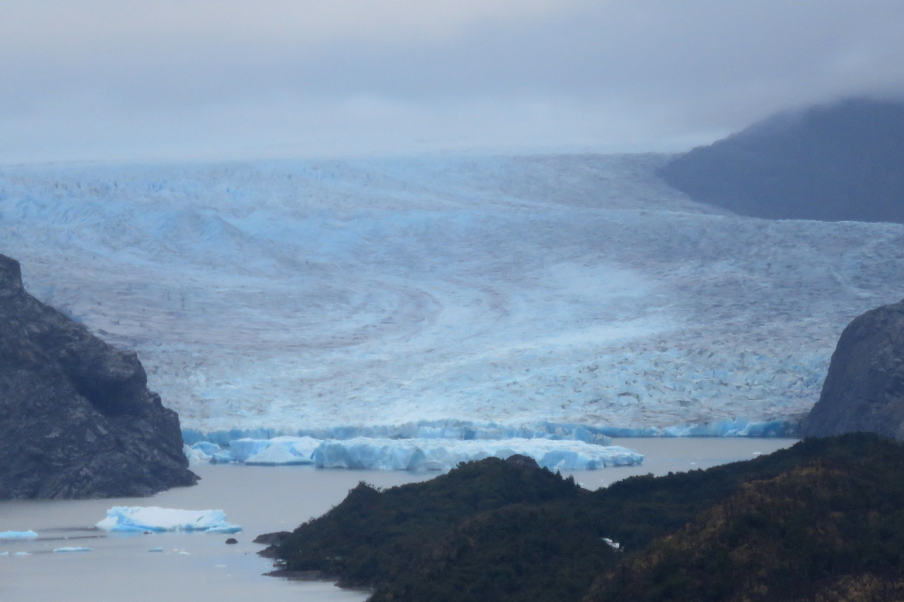 I was struck by the quiet – indeed, the silence much of the time – of our hiking environment.  Many bird species had likely already migrated.  As for “charismatic mega-fauna” in the mountains, there is only one species – the elusive puma, which I was thankful we did not see.

It was a treat to observe this tiny owl, the Austral Pygmy Owl, which perched on a low branch for over 10 minutes while we waited in line for a boat trip across Lago Pehoé to start Day 2 of the W Trek. 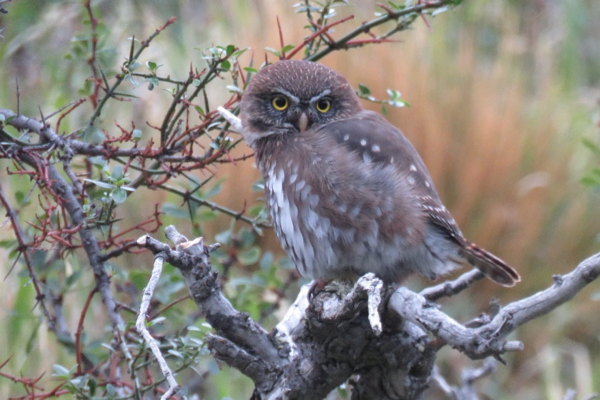 Another of the few birds we encountered was the Southern-Crested Caracara, this one on the trail up to the Torres del Paine. 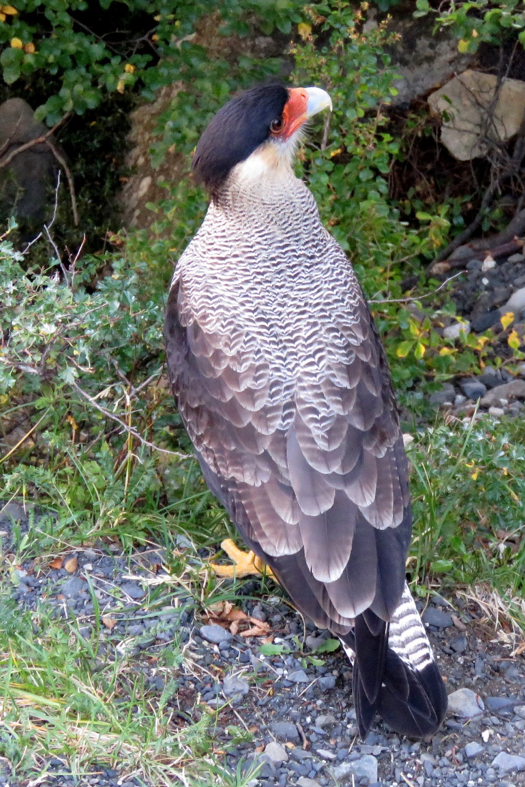 Although a very adaptable wild species, found in many different habitats from mountains to steppe, we didn’t see any Guanacos (in the Camelid family, as are the domesticated llama and alpaca) while hiking.  However, we encountered dozens of them, often in large groups, while travelling by road on the Patagonian steppe between hiking locations.  For millennia, Andean peoples have relied on them for food and fibre.  Guanaco entrées were on offer in some restaurants where we dined. 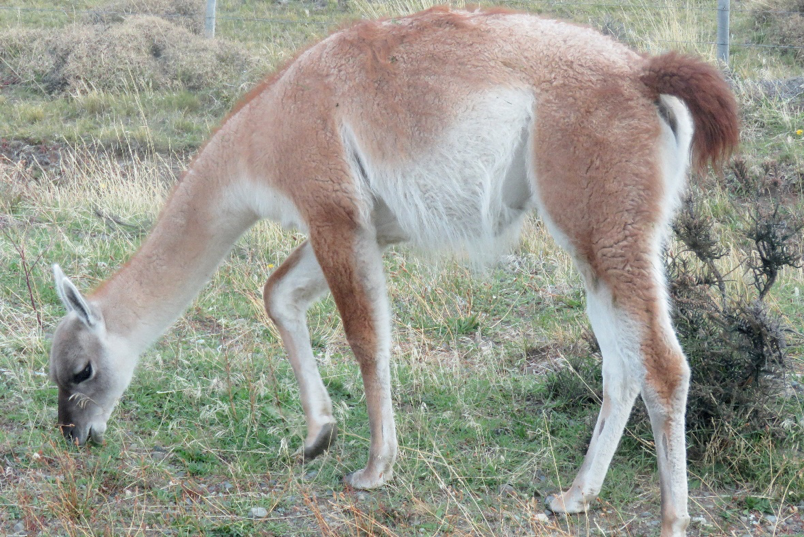 This was my first trip to the southern hemisphere and I revelled in the mind-bend of autumn colours in April, such as this view on our way up to the Torres Del Paine on Day 1 of the W Trek. 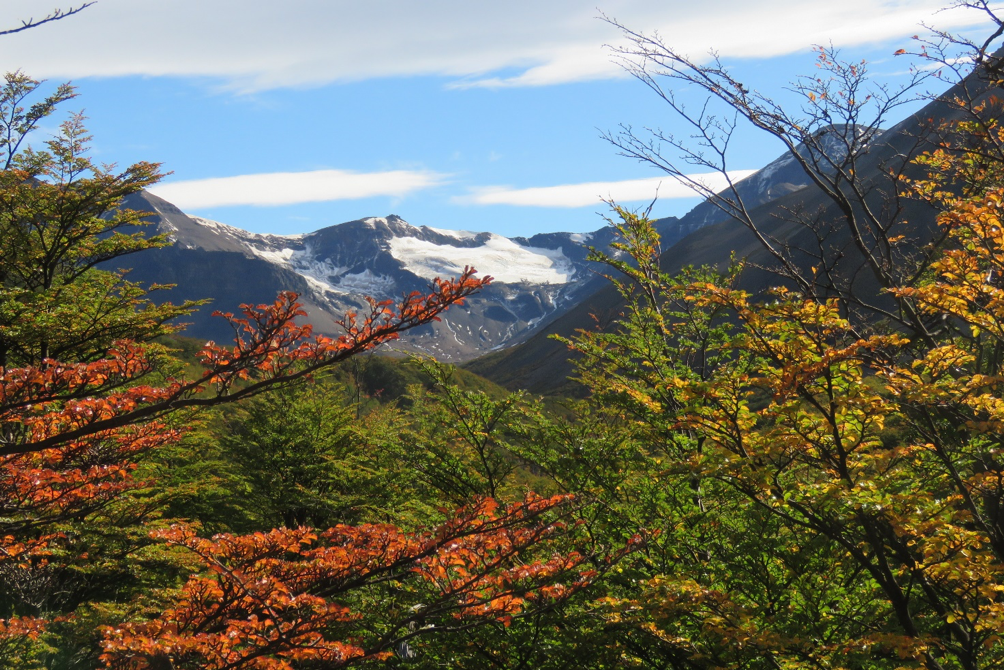 The ubiquitous Lenga tree (aka high-deciduous southern beech, Nothofagus pumilio) surrounded us at the lower elevations of all our hikes in both countries.  Its small leaves in a range of autumn colours were delightful, as on this short hike we took on Cerro Frias near El Calafate. 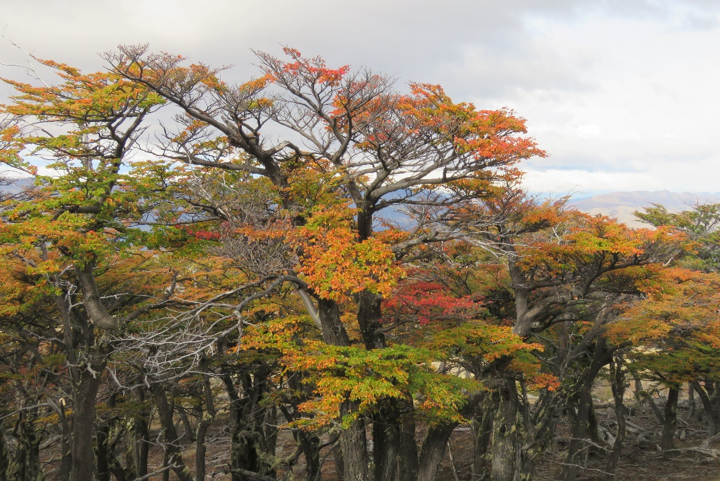 When you wonder if you’re taking your last breath during a long, arduous climb up to a lunch spot in the mountains, great weather and a fabulous landscape were certainly the reward on Day 3 of the W Trek. This provides a fitting conclusion for this travel post – sitting across a small valley from magnificent Cerro Paine Grande, listening to and watching for the many small avalanches that happened during our stop there. 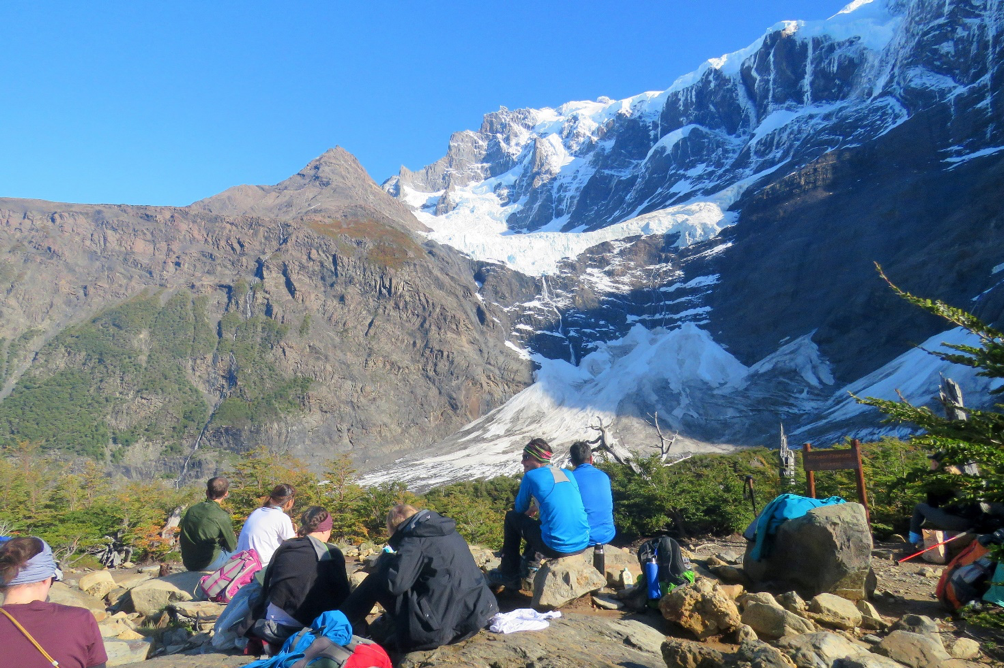 Want to know some facts and info about this trip?  Please see my accompanying post available next week.

G Adventures did not provide Linda Pim with any freebies, nor did they review this post.