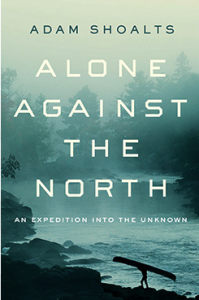 Alone Against the North

My first impression of Adam Shoalts, author of Alone Against the North, was that he was a wacko—crazier than the Crazy Canucks. Who else would seek out the most unexplored territory he could find in an area of Canada considered by sane people to be an insect-ridden purgatory?

But after delving into his remarkable, page-turner of a book about canoeing Canada’s north, I realized that Shoalts is truthful when he describes himself as an “explorer” as opposed to an “adventurer.” A Fellow of the Royal Canadian Geographical Society since 2013, he writes, “…an explorer publishes new geographical knowledge and documents findings.” That may be the case, but Shoalts’ explorer tendencies extend well beyond the need to record his findings. The unknown and uncharted obsess the twenty-something-year-old.

Of Obsession and Literature

On learning his favoured paddling partner couldn’t accompany him on an expedition, Shoalts writes, “…to delay a day longer, let alone a year, was likely to drive me as mad as Captain Ahab.”

Shoalts peppers his stories with literary references such as this nod to Moby Dick, as well as to other explorers including Henry Hudson. Hudson perished after being cast adrift in James Bay by mutineers in the spring of 1612. Shoalts includes fascinating tidbits about Arctic birds and animals. He discusses geology and climate. As a result, his story is as much about the land around him as it is about his expedition into it.

But adventure he does. Shoalts describes solo trips he made along a “Nameless River” he christens the “Little Owl River,” as well as the previously unexplored Again River. The latter drains into James Bay. Both are in the vast Hudson Bay Lowlands, one of the least explored places on earth, according to Shoalts.

An unwise choice of paddling mate (though one wonders if anyone would want to go on these trips) deserts Shoalts after he learns the next segment of the “voyage” involves a two-week portage to the river’s uncharted headwaters. Shoalts describes the journey, “…struggling under heavy loads [including carrying their canoe], swarmed by hordes of biting insects, staggering through at turns thick brush and open swamp, battling both physical and mental fatigue, only a few missteps would be sufficient to make us lose our way.”

In the end, Shoalts does most of his travelling on his own. He survives on fresh pike, garnished with arrowhead roots and blueberries. On the unknown, 100+-kilometre-long Again River, he survives plunging over a six-metre waterfall that shatters his gunwales. The crash breaks his front seat, leaves gapping holes where bolts have been ripped out and smashes the canoe’s hull. Shoalts successfully negotiates numerous previously uncharted waterfalls and several canyons to complete his expedition on the wily Again River.

But having completed the journey with only a compass, Shoalts has to return to the Again for a second trip. This time he accurately measures and describes the virtually unknown and inhospitable river that is unlikely to be paddled by anyone else who is canoeing Canada’s north.

The Toronto Star describes Shoalts as Canada’s Indiana Jones. But I think that belittles both Shoalts and his accomplishments. His desire to explore the unexplored and chart the uncharted are more reminiscent of Mackenzie, Amundsen or Shackleton than a slightly awkward Hollywood character. In Canadian Geograhic, explorer Joe MacInnis suggests: “Exploration is about forging dramatic new relationships with the natural world and telling essential stories to accelerate our understanding of the critical importance of these relationships.” A highly intelligent individual, Shoalts, I’d argue, will meet this high standard one day.

Anyone who dreams of canoeing Canada’s north should pick up this book.

How to Acquire More of Less

Judge this Book By it Cover