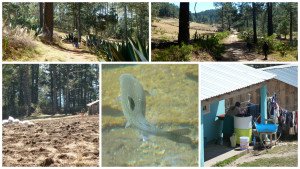 It turns out our great sleep may have been drug-induced. Quite possibly, the tea we drank before bed was te limon, made by stashing a knot of semi-dried stems that look a lot like the long, half-dead leaves of a garlic plant or daffodils into a pot of water and bringing it to the boil. I’m told the plant is a type of verbena and that it makes you drowsy and apt to have happy dreams.

I also learned that the similarity between what I described as the “boreal forest” and the vegetation at home where I live in Southern Ontario is not just a coincidence. My friend Neil, who also made my brooch from that 320-year-old cedar I mentioned in my post about the fattest tree in the world, sent me a note explaining that every metre rise in altitude roughly corresponds to about a kilometre change in latitude. So our perch at 3,200 metres above sea level, as we were at that lookout, put us roughly at the same latitude as Belfountain, the village where I live! How neat is that? It’s not quite the Canadian Shield, but those pines and spruces that carpet the Sierra Norte in Oaxaca, Mexico have to endure conditions not that much different from the red, white and scotch pines that I see every time I hike the Bruce Trail.

Back in Mexico, we wandered down for breakfast to find three American birders there ahead of us. It was great to get to ask them about some of the birds we’d seen. They also pointed out a flock of crossbills that was flying through and stopping on the trees across the road from the restaurant. We learned that the black and orange birds we had seen near the beach a few weeks earlier were in all likelihood exactly what they appeared to be: orioles.The difference between birds in Mexico and at home is that there were dozens of different varieties, many of them virtually indistinguishable from each other compared to relatively few different varieties at home. These birders were having fun, but they threw up their hands in despair when asked to identify the exact species of some of the birds they’d seen.

Then there are the large and colourful trogons and parrots and macaws. The Sierra Norte where we were walking has over 400 species of birds, whereas it is estimated that the whole of Canada has about 460 different kinds.

We saw three different types of jays: the magpie jay, a slate-breasted one and another that looked like the spectacular stellar jay. We saw what looked like a scarlett tanager, but who knows, maybe it was a crimson-collared tanager. And maybe that oriole was actually a flame-coloured tanager. Alex glimpsed a spectacular trogon that is often referred to as Mexico’s national bird. Although the golden eagle is the country’s official bird, the trogons in this area of Oaxaca are green, black and red, which are the three colours of the Mexican flag.

We left Llano Grande walking through a forest that felt more like fall than spring. As Mexico is about half way through the dry season, brown leaves littered the trail and crunched under our feet. We could smell the pine gum as the rising sun warmed it up. After about an hour on the trail with our new guide Rosaria, we came upon yet another reminder of home. 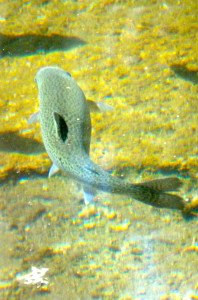 Rainbow trout thrive in the cold water of the high Sierra Norte and are often offered on dinner menus though we didn’t try any. The one in this photo was actually in a small trout farm. You can see by the photo how clean the water was. A nice home for these fish.

After passing by the trout farm, we climbed up (slowly) and down through pine and oak forest that would open up in places where farmers had cleared a bit of land. The main crops were potatoes and corn (more commonalities with Caledon). We knew we weren’t at home though when we saw ploughs being pulled by pairs of bulls (not oxen, but bulls). We also learned that in the Sierra Norte they take their organic agriculture seriously. They use natural fertilizers and the potato fields were littered with white sacks filled with compost that came from nearby villages. Moreover, they use no GMO or hybrid varieties, collecting kernels from the previous year’s crop to plant. We also saw places where they were growing squash among the corn stalks as companion plantings. 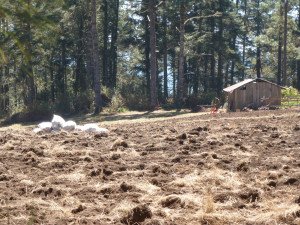 For a long way, we walked along a beautiful trail lined on both sides by agave-type cactus that made an effective barrier and reminded me of the hedges that are so common in England. Natural, growing fences. 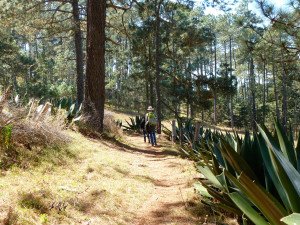 In all, we covered 10 kilometres that day in four hours. The last two-thirds of the route was up and down, but mostly up as we climbed above Llano Grande to over 3,200 metres into a village with the tongue-twisting name of Cuajimoloyas (qua-he-moe-loi-az??). I often simply referred to it as “guacamole” which seemed to work just fine. Life continues in a simpler way in these towns though I’m not sure the woman below who is washing clothing would have described her task as simple. 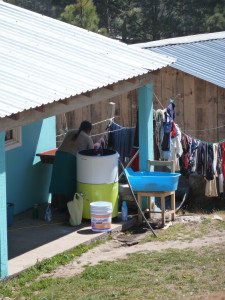 Weekending in Caledon: Hamptons of the North?

How to Acquire More of Less