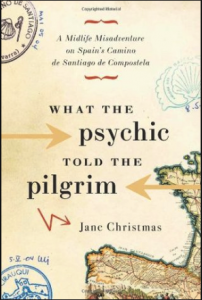 What the Psychic Told the Pilgrim:

What the Psychic Told the Pilgrim, Jane Christmas’s entertaining and oftentimes humorous tale of her experience walking Spain’s famed Camino de Santiago de Compostela in 2004, proves that if you have travelled this route, then reading about someone else’s experience can be a frustrating undertaking.

The book made me laugh and curse, but more often I was amazed at how different Christmas’s experience was compared to my own. Yet we both walked the same route at almost exactly the same age and only one year apart. Like Christmas, I began in France in Saint Jean Pied de Port. Unlike her, I walked every step and, after reaching Santiago de Compostela, I continued on to the Atlantic coast at Finistere. Not that I’m critical of her liberal use of buses and taxis or her occasional stay in a hotel rather than a refugio (hostel) or anything!

But this review isn’t about me and my Camino; it’s about Christmas and her book. What the Psychic Told the Pilgrim is an entertaining read for anyone, not just for people who know what St. James Way is and have covered about 800 kilometres crossing Spain following yellow arrows and scallop shells on blistered feet.

Much of the book’s entertainment value comes from Christmas’s descriptions of her relationship with fellow pilgrims (as people who walk the Camino are called). I can’t help but think that any rational person would hesitate before spending one’s 50th birthday taking 13 women, most of whom you don’t know, on a hike in a foreign land where they speak a language you don’t, on a challenging route when your idea of a hike is crossing the street in your Pradas. That being said, Christmas’s foolhardy plan makes a very entertaining ploy for a book.

Christmas’s descriptions of her fellow pilgrims display her sharp wit and deft pen. She describes the petty and sometimes cruel antics of her co-walkers with an honesty that made me squeamish. I am glad I didn’t walk the Camino with her. And I’m not sure I would want to be among her circle of acquaintances given her unflinching willingness to sacrifice another’s privacy for the sake of a good story. (What happens on the Camino stays on the Camino, in my opinion.) But that’s me and the success of Christmas’s four travel books demonstrate that her formula works.

Christmas’s other books include The Pelee Project: One Woman’s Escape from Urban Madness (2002), Incontinent on the Continent: My Mother, Her Walker, and Our Grand Tour of Italy (2009), And Then There Were Nuns: Adventures in a Cloistered Life (2013).) She even has her own page on Wikipedia and was shortlisted for the Stephen Leacock Award for humour. Not that I’m jealous or anything!

Despite the differences between my Camino and Christmas’s, the outcome, the overall impact of the experience was not dissimilar. Walking St. James Way is a game-changer for most people. The physical test of a month’s walk combined with the people you meet and perhaps some form of special energy the route attracts seem to affect even the most un-Shirley-MacLaine-esque pilgrims.

Don’t expect that you will necessarily find your fair-haired man on the Camino de Santiago de Compostela, but, as Christmas suggests, it is an “adventure.”