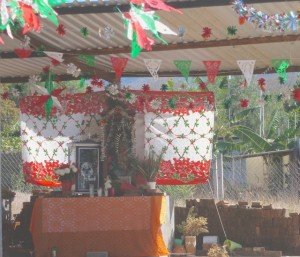 As some of you know, Alex and I spend winters in warmer climes. Since Alex’s lodge – The Lodge at Pine Cove – is closed for winter, and winter hiking isn’t the best, we head for points south. We’ve been favouring Argentina these last few years, but this winter, we’ve returned to my favourite country in the world after Canada. We are in Mexico. More specifically, we are in Oaxaca, Mexico, which is a state that is quite far south in the most southerly country in North America. And though winters can be a bit chilly since Oaxaca is situated at over 1,500 metres, this year it’s particularly warm. During the day, the mercury rises to 25 degrees Celsius or more, whereas at night, it’s cool and perfect for sleeping. Heaven.

But with the weekend upon us, it was time to get out of the hubbub of the city and out into the countryside.

Having promised to take some friends from Gabriola Island out for a walk above the nearby village of Huayapam, I decided to scout a route in advance. It was a great excuse to get out of the city for two days in a row.

So on Saturday, January 9, under the blue skies you’ll see below, I set off from my small hotel to catch either a bus or collectivo (a car that runs back and forth between Oaxaca and takes five passengers (3 in the back and 2 in front) for the 20-minute drive to Huayapam. The bus is cheaper (50 cents) and is ultimately more comfortable than the collectivo that costs 75 cents. I decided I’d take whichever came first.

En route to the pickup spot, I passed the structure below. Workers were in the process of dismantling what had been, believe it or not, an ice skating rink. The roof was gone. For about a week over Christmas, it was open to the public. It was also open to the air. It had a white canvas roof, but no sides. It’s hard to imagine the cost of keeping the ice frozen. One night I watched Mexican skaters. The ice was jam-packed though the biggest crowd was around the outside. People walked more than skated holding on to the boards as they made their way around the arena. Clearly a Mexican hockey team would not have presented a problem – even for the Maple Leafs! 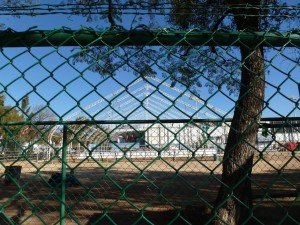 I climbed into a collectivo and sat cheek by jowl with my fellow passengers, but it’s a quick trip and for 75 cents, I could hardly complain. 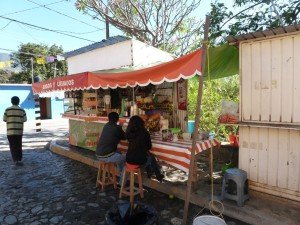 When I arrived in Huayapam, I treated myself to some fresh O.J. at this street stand. For $1.50, I had a glass that must have contained close to half a litre of fresh juice. 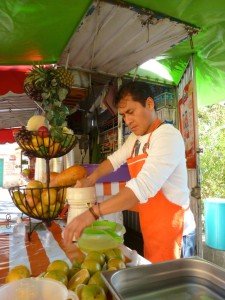 Don’t be fooled if you think Mexican street vendors aren’t clean. This place, like most, though not all street vendors, was spotless. When handling coins, this fellow protected his clean hands by only taking my money with his hand encased in a plastic bag.

I sat around the corner from this church drinking my juice. As in most Mexican towns, the Catholic Church dominates the main square. It was locked up tight, so I couldn’t explore inside, but it had a delightful facade. 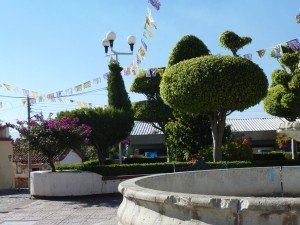 Across the street from the church was the municipal hall. It took me a moment to realize these trees were all sculpted into birds. 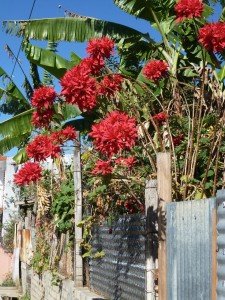 The Canadian version of this plant, poinsettia, is a Christmas standard. It’s original home is in Mexico where, as you can see from this specimen, it thrives and then some. In Mexico, it’s called Flor de Buena Noche (Christmas Eve Flower). 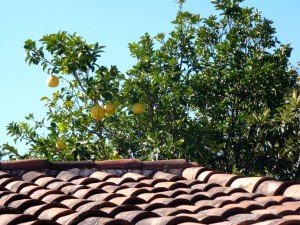 Further along the road I took out of the village, I spied these enormous grapefruits. 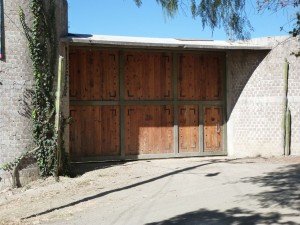 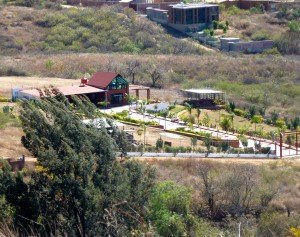 In Huayapam, there is concern about the influx of wealthy Mexicans and Gringos who build enormous homes behind grand gates such as those above. The town is popular because it’s very close to Oaxaca and is perched up at a little higher where the air is fresher and a breeze blows. Also, there are several reservoirs nearby so water is plentiful – a rarity in a country that is more often severely parched.

Problems that have arisen in Huayapam demonstrate how our social structures need to bend and change over time. As I understand it, the land in the village is communal and the “municipal” government, or what we would call municipal government is elected/appointed from the landowners. Within the community, members are required to perform volunteer service. You might have to be a guide in a park or a municipal police officer or, as one person I learned about, the bell ringer in the village. Each voluntary position lasts for one year. If you do well in your voluntary service, you will be asked to do more. The carrot in all of this is that if you do a good job, you may be given land.

The requirement to do community service is a problem for the Mexicans, mostly young men, who go to work in the US. If they don’t do their voluntary work in their home village back in Mexico, they won’t receive land. Some communities will take money in lieu of hours, but some won’t. So the repercussions for the families of these absent volunteers can be huge.

Another social problem involves how communities such as Huayapam are funded. The town owns its own bus service, offers community services and holds events such as the fireworks display on January 6 or epiphany. To raise funds, they go door to door for each event and people give them money. However, the owners of these large homes who don’t partake of town services reportedly refuse to give money for these things. So each time property is sold to outsiders, it lessens the income-generating power of the town. The town gets its pound of flesh anyway since, or so I’ve been told, the homes owned by these wealthy newcomers who don’t pay, are the places most likely to get robbed! 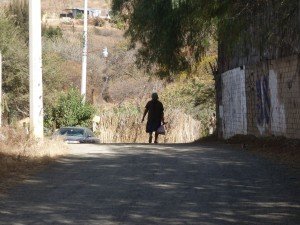 In contrast, I followed this Mexican woman as she made her way home. Below you can see her house. 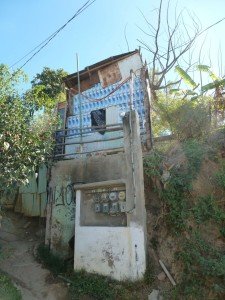 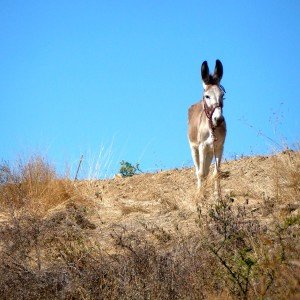 I left town on a street named Magnolia that had lots of magnolia trees that were in bloom – in January. It was hot and sunny and dusty and there above the road was a Mexican burro. He was very interested in my passing though not inclined to carry my backpack.

All was going well at this point, but metres later I came to a fork in the road. My friend had told me I could walk along this road from Huayapam to a town called San Filipe del Agua. I’d also checked out the route with the wonderful hiking group in Oaxaca that has a website called Hoofing It In Oaxaca (http://www.hoofingitinoaxaca.com). It said the 7k route followed dirt roads (like the one I was on) and single-track trails like the one I could see farther up the slope from where I was walking.

I went back and forth a few times, but ended up taking the upper route, hoping it would link me to the trail I could see upslope. Soon I arrived at a house where first one big dog began to bark, then another, then another and then out came an enormous German shepherd. I was turning tail when up drove a truck with a man at the wheel. He had yet another big dog in the back. He stopped. We said our greetings. He shook my hand. I asked him how I could get to San Felipe. He went into a long explanation, most of which I didn’t understand, but basically pointed downhill. “No, you can’t walk on those trails,” he said, pointing up the hill.

Dutifully I walked down into what I hoped, though doubted, was San Filipe. Turns out it was an outer suburb of Oaxaca. I’d been walking for over an hour by now in the hot sun and at altitude so I thought about simply returning to Oaxaca along the route I’d just taken.

But I decided I wouldn’t give up yet. Instead, I followed my nose. I wanted to get onto that trail up above if only to take it back to Huayapam. Up I climbed on a dirt road. Each time I came to people on the street or in a house, I’d ask if I could get to a trail that would take me to Huayapam. Without exception, they pointed me up hill. This process continued until I ran out of houses and road. Fortunately, at the last house, I was directed to keep walking where I would find a trail that would take me to Huayapam.

Below is a photo of the beginning of the trail along a route that had spectacular views of the Oaxaca valley below. 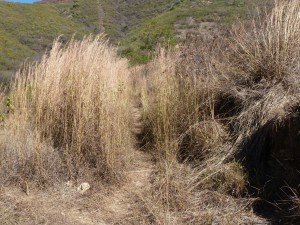 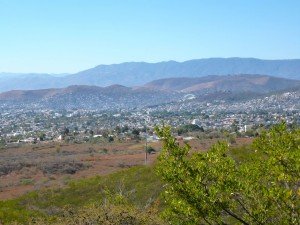 This is a view of the city of Oaxaca (pop. 250,000). It is a beautiful colonial city with incredible food and many artists. It’s especially famous for mole, the spicy sauce that sometimes contains chocolate and is served over chicken. They have seven different kinds of mole in Oaxaca.

There are churches and churches and churches, the oldest ones made for a locally mined green stone that is stunning. You can wander the streets for days finding great gems ranging from cafes in old buildings, gardens, squares, markets, art exhibits and more restaurants than you could possibly try out. It is gorgeous and has an amazing climate.

The city gets 70 per cent of its revenue from tourism, and is a popular destination especially for Mexicans. In 2006, the teachers’ union took over the city occupying the main square or zocolo. Seventeen people died in the standoff. Political problems continue, but tourism has rebounded. The centre of the city is flooded with tourists these days.

Our hotel is below. The door you see is to our room. The door beside it is to a small kitchen. For this sparkling clean room with an enormous courtyard and use of the kitchen we pay about $30 per night! 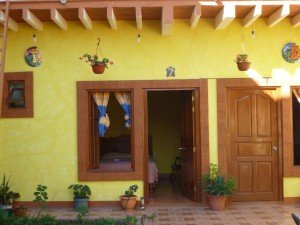 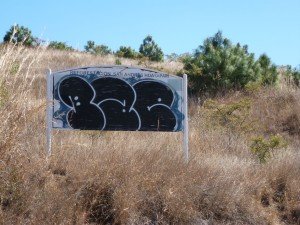 As I returned along the trail I passed by this reforested area where pine trees had taken root. It would be great to see this become the forest it likely was before the trees were cut, and cows, sheep and/or goats kept the regrowth at bay. 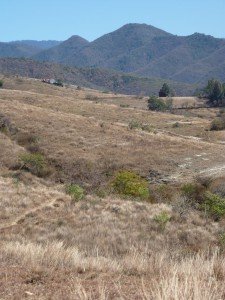 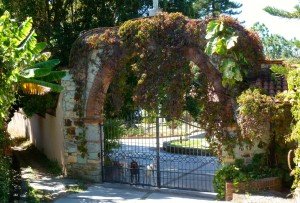 Upon my return into Huayapam, I came across yet another home of the rich, famous — and Labrador retrievers. 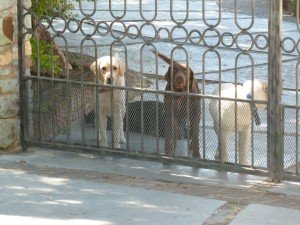 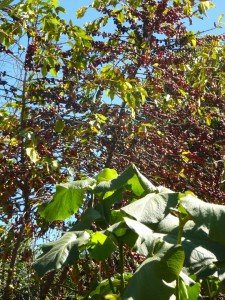 Most homes in Huayapam grow coffee in their backyards. 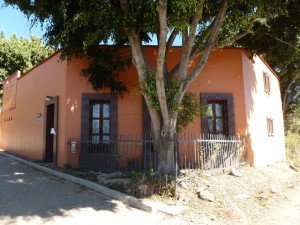 Huayapam has a Canadian connection. The house above was built by Aunt Heddie, better known as Jackie Burroughs, the decorated Canadian actor. She starred as Aunt Heddie in The Road to Avonlea and as Mrs. Amelia Evans in Anne of Green Gables. Born in England in 1939, Burroughs died in 2010. Upon her death, her much-loved house above with her tremendous gardens were, according to her family, stolen by Mexican authorities. As this story goes, Burroughs wanted to leave a large part of her wealth to her gardener since the garden behind this house was her pride and joy. Sadly, her gardener received nothing and because of a technicality in the deed, her family lost the house.

It is now a “Casa Comunal” where I was told they occasionally hold events or workshops. But mostly it sits empty with the gardens being taken over by weeds.

After visiting Aunt Heddie’s house and proud that I’d found the trail I had been looking for, I stopped back at the spot where I’d had my orange juice about three hours earlier. Hot, covered in dust and in need of food and drink, I ordered guava juice and a sandwich. Both were delicious. 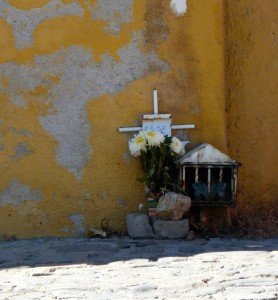 Judge this Book By it Cover