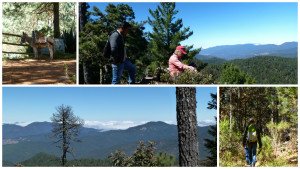 When I left off yesterday, we were having a love affair with our cabana in Llano Grande (literally Large Plain). Next test was the hiking itself, and our guide. William gathered us soon after we settled into our little home to guide us to a mirador. Off we strode into the 3,100+-metre-above-sea-level-wilderness. Fortunately, William’s knowledge of medicinal and other plants was tremendous and he was generous with his information about life in the Sierra Norte mountains. He gave us lots to think about and plenty of opportunities to stop and rest along the way. As we slogged uphill, our lower-altitude hearts pounding, he pointed out two types of pine trees and how the Pinus rudis had been ravished by an insect pest — una plaga. 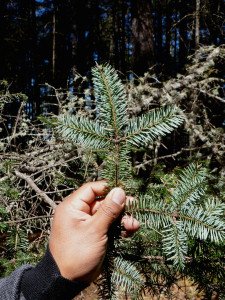 He demonstrated why spruce (oyamel) was nicknamed “Avios religioso.” See the photo for the explanation. We saw Mano de Lion (Lion’s Hand), Laurel (Bay leaves), Poleo (which you will learn about later) and a huge thistle called Rosa de la Montana, among others. In this way, he kept us moving albeit slowly on the uphill portions.

Then, at what seemed to be exactly the right moment — as-in-I’ve-been-walking-long-enough-and-could-use-a-break-though-I’m-too-proud-to-admit-it — we scrambled up a short steep slope. And there before us was…could it really be? Yes, it definitely was. There before us was the boreal forest! Imagine that, in about an hour we’d walked all the way from Mexico to the Canadian Shield.

Okay, so it wasn’t really the boreal forest and we weren’t really on the Canadian Shield, but the landscape and vegetation, minus the occasional giant Agave Silvestre cactus, was so Canadian, so un-Mexican, so unbroken-expanse-of-cascading-hillsides-cloaked-in-evergreen-trees that we really did have to pinch ourselves. Where were we again? Was this a mirage? Were we really in Mexico? Then William pointed out an active volcano in the far distance and we came back to the Sierra Norte in central Oaxaca State. 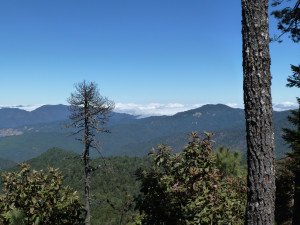 That afternoon warmup loop hike was just over 9k in length. At home, in the relative flatlands of Southern Ontario where I live, I would have chewed up those kilometres in about 2 hours. This trip took us four. Partly, it was the up and down (we went up a cumulative 500m and down the same amount), but the altitude was the main factor. A slope that I would not normally have even noticed had my heart racing. I felt as though the fat circus lady’s legs had been transplanted onto my hips. But we simply took our time, stopped for a break at each of the two miradors we visited, and in this way, Alex earned his afternoon nap in a hammock and I reveled guiltlessly in reading my book as I too curled up comfortably in a hammock with the warm, though not hot sun, keeping me cozy. 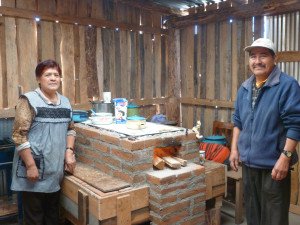 And in case I forget to mention it, this sunny afternoon, with the wind passing through the pines making me once again believe I was at home in Canada, was enjoyed after a good hot shower. It was before we wandered back down to Llano Grande’s restaurant where we enjoyed a meal in a way that is only experienced after a good day of exercise in the great outdoors. Our cheeks burned from the combination of sun and wind. Our monkey brain was hard to hear. We were in the moment.

We ordered the chilis stuffed with cheese and slathered in freshly made tomato sauce, rice, beans and piping hot, homemade tortillas all cooked over a wood fire. We tried the te poleo made from a plant William had pointed out to us earlier in the day. It’s also known as te boracho or drunk’s tea as it’s good for a relieving a headache. Not that we drank a lot of alcohol, but it became our standard bebida (drink). 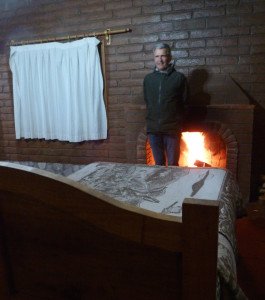 Later, but at barely 9pm, and with a fire roaring in the fireplace and warm wool blankets pulled up to our chins, we cuddled up together between crisp clean sheets on a firm bed.

Did we sleep? You know, it was one of those deep, invigorating, fresh-mountain-air sleeps. It was the kind of sleep you dream about. It was one of those sleeps that you sometimes wonder if you will ever have again.

Too good to be true? Stay tuned to find out.