Getting Over the Jitters 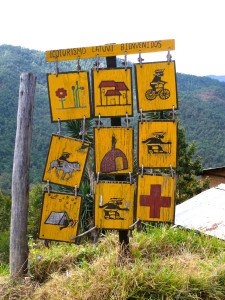 At about 9:30am on Sunday, February 14, Valentine’s Day, we arrived in the small hill town of Llano Grande. We feared we might have made made a big mistake. Would the cabins we’d been promised be liveable? The bathrooms clean? Would our guide be there as promised? Would there be any actual trails?

After all, this is Mexico where the men spend their days sitting in the hot sun drinking cervezas under the shade of an oversized sombrero. “Mañana, Mañana. Mañana” Isn’t that the Mexican mantra?

Lazy, drunk, unclean heathens. Why can’t they speak English? They live in North America don’t they? And now, all the news about drugs, guns and kidnappings. What had we got ourselves into? Seven days walking in the Mexican mountains. Would we ever be heard from again? Would our families have to come looking, only to find us dazed, robbed of our boots, clothes and cash?

Okay, so I exaggerate. I’ve spent enough time in Mexico, my favourite country after Canada, to know that most of the stories about Mexico are over done. Sure there’s poverty and there certainly are drug-related problems in a handful of places, and by and large Mexicans don’t speak a lot of English, but Mexico is a magical place full of the friendliest and most helpful people I’ve ever met. Just try saying “Buenos dias,” to the Mexican woman walking past you on the street or to the workmen digging ditches in that hot sun. The smiles that light up their faces will make your day. If you even have a few words of Spanish try them out. Any attempt to communicate is appreciated regardless of whether or not anyone understands what is being said. 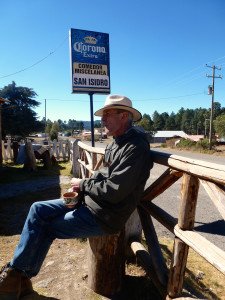 Dropped off by the small office for Pueblos Mancomunados of the Sierra Norte of Oaxaca, we were greeted by a couple of tidily dressed young fellows under a blue sky so clear it seemed more like a storybook description of a sky than the actual thing. At over 3,100 metres (about 11,000 feet), we were getting fairly close to the sun and there wasn’t a lot of atmosphere between us.

Residents had woken that morning to a dusting of snow. The combination of the hot sun and the cool air brought back the lyric to Nothing But a Breeze, a song recorded by Jesse Winchester (and others). It goes: “Me, I want to live with my feet in Dixie and my head in the cool blue North.”

After a delicious and hearty breakfast in the village’s only restaurant (Oh that our little villages in Southern Ontario could offer such informal, but delicious and inexpensive dining.), our guide William took us up a steep slope to our cabaña. Tucked under tall pine trees that swayed ever so slightly in the light breeze, were 10 wooden cabins. A pair of colourful hammocks were the only exterior clue that this wasn’t Northern Ontario. The second clue was inside. Our cabin was spacious with large windows that opened to the fresh air. There were no screens nor were there mosquitos. The beds were made up with crisp, white sheets with an extra woollen blanket there just in case. An enormous fireplace that they promised to light for us at 7pm filled one wall, and a table and four matching wooden chairs that we would later learn were made from local pine at a community-owned factory gave us a place to play cards had we had the time. The bathroom was huge too and totally tiled. It was spotless. It gleamed. Hot water gushed from the shower. The toilet flushed. 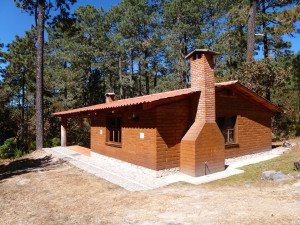 There was no fake wooden panelling, no musty smell, no cigarette burns in indoor/outdoor carpet — nothing to make us think we were actually travelling on a budget at home. I wanted to stay forever listening to the wind in the spruce trees, breathing in the smell of pine tar released by the warm sun as I stretched out in the hammock and swung listening to the chirp of birds, some of them Canadian varieties such as robins on vacation in the Mexican mountains.

We pinched ourselves. This, we thought, is a very good start.

Hiking With All My Senses

In Hindsight and on to the Future

Pueblos Mancomunados – The Hiking – Off and away