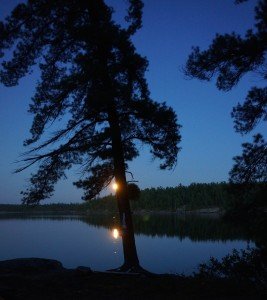 I slept alone in a tent on my own little island in the middle of the French River on Thursday night. The thought of there being nothing more than a thin sheet of nylon between me, and the bears and wolves that would inevitably come skulking in the dark was scary. There was nobody but me to protect me. Funny how having a friend or partner along gives one a sense of security in the wilderness. I guess it’s because—as they say—you don’t have to outrun the bear, you only need to outrun your friend.

I was alone in the wild for practical reasons: I was meeting Norm Dokis from the Dokis First Nation at 7am the next morning to interview him for a story. I don’t drive a motorboat, and I would have had to launch my kayak into the inky blackness at 4:30am to get to his camp in time for our rendezvous. So I decided to head out the afternoon before.

Sometime between making the decision to sleep out alone and climbing into my kayak, which was packed with a tent, sleeping pad, a toothbrush and toothpaste, a ham sandwich, hot tea, gorp and zuchinni bread, I realized that this adventure was a rite of passage, almost a coming of age experience for me. If I could do this, it would unleash me from having to wait for someone else to head out for a day or two or three on a hiking, kayaking or canoeing trip. On the cusp of a precipitous birthday, I could finally go as I pleased. It was easy for me to extend that thought to life in general. Freedom 59. 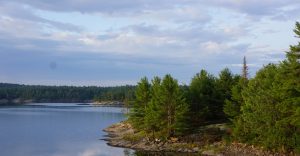 It was a blissful trip to my campsite: The temperature a perfect 27 or 28 degrees; big puffy clouds heralding fair weather. Strong winds that can whip up whitecaps on the French River—a waterway that is sometimes a kilometre wide, and more lake-like than stream-like—were absent. Despite being heavily laden with gear, my kayak seemed sleeker than ever. It glided over the calm water.

With an eye on my map, I kept my bearings amid a plethora of islands and dead-end bays. The two-and-a-half-hour paddle turned to three hours given that I explored some of the nooks and crannies along the shoreline. But I was paddle-ready having been out at least three times a week for the better part of the summer. So when I arrived at my Group-of-Seven, windblown-white-pine and granite campsite, I felt as fresh as when I’d started. I could have paddled for another three-hours, and was a little disappointed that I didn’t feel more tired, more deserving of the ham sandwich and tea tucked inside my trusty red and yellow Perception Carolina. I don’t know that at any time in my life I’d felt more fit and capable. I wasn’t ready to take on a bear, but I figured I could likely out-run a camping mate, had I had one.

The night was uneventful, peaceful in fact. After skinny-dipping in the warm water, I sat sipping my tea on the enormous humpbacked rock that sloped down from my tent into the river. The plopping sound of a jumping pickerel or bass broke the silence every three seconds or so. Gulls soared overhead calling out to their friends who bobbed on the river below like little white tugboats. Chipmunks, that had somehow made their way onto my island, rustled last fall’s dried oak leaves. 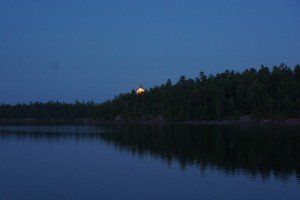 As darkness descended, the animals settled, and the night’s chorus of insects began. I couldn’t see the sunset from my vantage point, but the luminescent harvest moon that rose phantom-like out of the horizon was far more entertaining than a drive-in movie. With the lunar light reflecting on the silky smooth, seemingly impenetrable black water, I made may way to my tent, determined to not let every creaking noise, every snapping branch or dropping acorn disrupt my pleasure of sleeping out under a full moon on a warm August night. 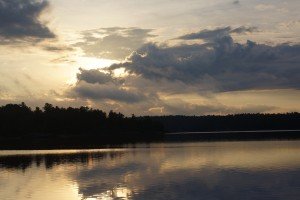 If there was a rampaging bear, a soft-padding wolf or crashing moose, I never heard it. I slept soundly until, as if on cue at 6:30am, a flock of geese passed overhead. The phaw-ump, phaw-ump, phaw-ump pumping action of their powerful wings woke me to the soft light of dawn. The rising sun peeked out from behind large broken clouds as I climbed out of my tent.

Walking Among the Portuguese Man O’Wars

In Hindsight and on to the Future

A Boneshaking Ride on a Velocipede: The Beginning of Cycle Touring