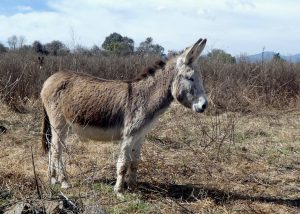 I entitled this post “Views, Ruins and Good Friends” since that is what you get on this three-hour hike. It’s one of my favourites in and around Patzcuaro, Mexico where I spend part of my winters. If you are lucky, you may get a burro too. 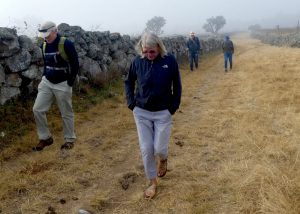 All of the photos I’m using in this post were taken by a hiking friend Howie Peterson. (I told you there were friends!) While, I’ve hiked this route twice, Howie took these on a hike when I wasn’t there. In the foreground is my friend Henriette, a fellow Canadian. She and I hike a lot together and seem to be very hiking simpatico.

You can see that it’s a cool misty morning. This route begins about a 10-minute drive outside of Patzcuaro. This small historic city was founded in the 1320s. (See the photo below.) Patzcuaro sits at over 2,000m above sea level so can be quite cool, well cold, in the winter. Frost is fairly common. The forest is pine and oak, though in the photo above, the trees you see are, I believe, nopal cacti. They produce what we call “prickly pears,” and the Mexicans refer to as “tunas.”

The hike begins in a laneway fenced-in by stone walls. These walls are a prominent feature of the landscape in this part of Mexico. The roads/lanes they parallel always invite me to see what’s around the next corner. The stone work is pretty loose. The walls stand up well in Mexico, but I don’t think they’d survive the frost heave of a Canadian spring. 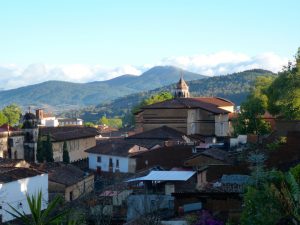 This photo gives you a feel for this ancient and very beautiful town. 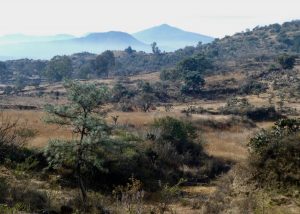 After following the stone walls for a kilometre or more, you turn left and start a gentle climb through scrubland populated by scraggily shrubs and many cacti (nopal and agave). A profusion of vague trails crisscrossed our path, evidence that livestock were present or at least had been. Mist shrouds the ever-present mountains.

When I walked this route earlier this winter, I was accompanied by a Colombian biologist and a local Mexican friend. They indicated that this was what’s known as badlands. It’s very dry, not much grows on it and grazing livestock have taken their toll. When I asked if it had ever been forested, they didn’t know. 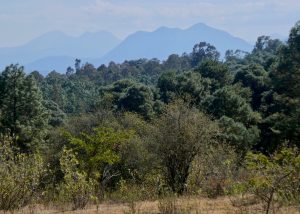 As you climb higher, the trees become thicker. On the hot sunny days when I’ve done this route, I was relieved to be out of the sunshine for short periods of time. If you hike here in February or March, as I did, you definitely want to get an early start to beat the heat. 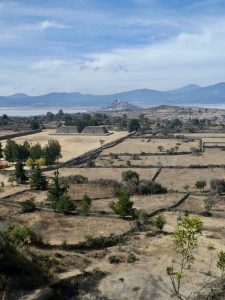 You are rewarded for your efforts, albeit isn’t too taxing a climb, with stupendous views. Patzcuaro sits on an eponymously named lake. You can see it in the background. Several islands dot the lake; the largest is Janitzio. In the photo, it looks as if it is joined to the mainland, but it’s actually a volcano-shaped island topped by an enormous statue of Jose Maria Moreleos, a hero of the Mexican revolution. You can take a boat to the island and climb up the statue. Many of the people who live on Janitzio are indigenous Purepecha.

You can also see the Ihautzio archeological site, which is near the centre of the photo above. The hike takes you down to these ruins and you can visit the pyramids.

Ihautzio translates to “Land of the Coyotes,” and Ihuatzio was once the capital for the Purepecha people. However, the capital was moved to the musically named, nearby town of Tzintzuntzan, pronounced zinzunzan. It’s known for its handicrafts and its very old San Franciscan monastery (circa 16th century). Tzintzuntzan means “place of the hummingbirds.” 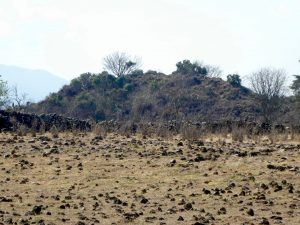 Howie took this photo at the level of the Ihautzio. These unexcavated pyramids are called yakata or yacata pyramids. The word seems to be derived from a Japanese word that refers to roofs. 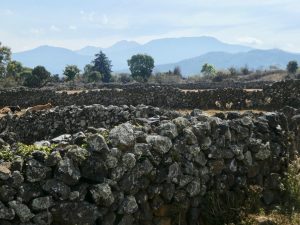 As you can see in this photo, there are numerous stone walls surrounding the site. These ones are more solid that those lining the laneway at the start of the hike, but I still don’t think they’d withstand the heaving that accompanies a spring thaw.

I love words and when I wrote “heaving” in reference to frost, I thought how specific a term that is. It’s the upthrust caused when damp soil expands as it freezes after having thawed during a warm spring day. 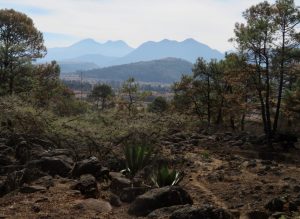 This photo taken higher up above the pyramids. You can see our path, It lead past a small pine tree and larger oaks as well as the native agave cacti (Agave americana) in the foreground. They resemble large aloe vera plants if you know what they look like. Farther back and to the left of the small pine tree is a century plant. In fact, a century plant is an agave cactus. What you can see is the bloom, which might be 8m tall. Despite its name, this plant seldom lives for more than 30 years.

I took the image below of a century plant in Oaxaca. It gives you a feel for the size of these enormous plants. 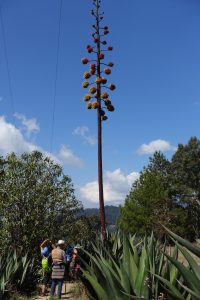 Following this hike, we usually make the short drive back into Patzcuaro for an early comida, the largest meal of the day in Mexico. It usually starts at 2pm. There is no end to the traditional and mostly excellent Mexican meals you can enjoy. On Sundays, Patzcuaro serves its famous carnitas. A spiced dish that we might call pulled pork, carnitas are often accompanied by guacamole. Since Patzcuaro is in the state of Michoacan, which is the avocado capital of the world, this is a fine way to end a very Mexican hike that includes views, ruins, good friends, amazing food and, with luck, a burro or two.

Thanks to Howie Peterson for these photos.

Behind Every Good Story in Cholila is a Gun

Rolling With the Punches (Part II)