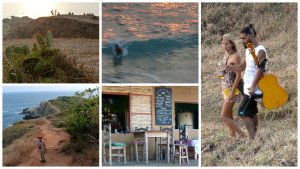 After too long walking on cobblestones in the graceful old colonial city of Oaxaca in the south of Mexico, I was pleased to feel warm sand between my toes and cool surf my feet. Better yet, the sandy beach in the small village of Mazunte on the Pacific Coast, a stomach-churning 6.5-hour bus ride down from Oaxaca, led to a spectacular hike.

I’ve tried to capture the spirit of the hike in the photo mosaic above.

The tradition in Mazunte is to climb up to Punta Cometa, which literally means Comet Point, to put the sun to bed. We did that on occasion capturing some surfers who seem to be scooting away from a swirling cauldron of copper fire. Mazunte is a hippy town and many of the people who shared our view that first night sported dreadlocks. I love good dreadlocks, but it’s the odd white person who has the quantity and quality of hair to pull them off. Fortunately, the lovely blonde woman we passed en route wasn’t tempted by Bob Marley. She was a fixture around the small village. Each time we saw her, she was deep in conversation with yet another handsome young man. She attracted suitors with the sweet ease of honey. In this photo, her partner had a hairdo that was all the rage in Mazunte for men and women alike. It resembled what we once called an “Iroquois.” Like dreadlocks, few could carry it off.

We left the soft sandy beach where the warm Pacific pounded relentlessly in places and more calmly in others and climbed up a steep trail that alternated between stone stairs and a rocky route sadly strewn with plastic debris. Once up top, the path continued along a narrow point supported by cliffs formed from rounded rocks. Pelicans, V-tailed frigate birds and terns were out-numbered by the vultures that rode the hot thermals along the cliff edge at our feet. The pelicans transformed into torpedoes that dropped beak-first into the ocean for fish whereas the osprey or water eagle that often perched on a rocky outcropping grabbed fish with its talons as it skimmed the water’s surface.

The trail led us down onto a small sandy beach and then up to the next rocky point where we found our spot to wait for the sun to find the horizon. Lest we forgot we were in Mexico, the ever-present cactus reminded us that we were in the land of tequilla and, especially in Oaxaca, the home of Mescal. As we sat, the sun hung momentarily before dipping into the sea. Its descent seeming to speed up once it began to disappear. The soft light of dusk descended.

We climbed down onto yet another nearly deserted beach where we found, much to our delight, palapas and a small restaurant with a handful of tables scattered in the sand. We didn’t take advantage of its offerings on this occasion, but we did turn it into a breakfast stop (and latte location!) when we walked the route early in the day.

On this night, we followed a rough dirt road that wound around the back of the point providing a short easy return to our hotel and—to my delight—making what became our regular walk into a perfect hour-long loop.

Rolling With the Punches (Part II)